Chris leaves Amélie-Les-Bains for the final leg of his epic journey.

When were you happiest last week?

There were two moments for me last week. The first was when we finally arrived in Dunkirk. After many months of training and preparation it was finally the big day.

The second was when I could see Canigou and the Albères from north of Narbonne. This was when I finally realised that I was nearly ‘home’.

What was your greatest fear?

Failure. For me there is a large element of failure as I didn’t beat the 50 hours which I had set out to do. But that has been largely over-ridden by the satisfaction of raising a huge amount of awareness of CF.

What was the best thing anyone said to you last week?

Rich saying ‘we’re proud of you, you’ve done it’

How much sleep did you get during the 60 hours?

What was the worst thing you ate on the journey?

The McMuffin breakfast after I had been sick in the Lapierre factory and really wasn’t feeling good.

What is the one thing you would have done differently?

Local riders for the more ‘complicated’ sections through town. Anthony was a great example of how this works near Troyes, the Baptiste and Jean-Luc near Lyon.

The three of you just spent pretty much an entire week together covering the 1,500km each way driving north and then heading back south. Tell us one thing you learnt about the other two.

We all laugh at the same bad jokes, but I’m not saying anymore.

Thanks Chantal. We also asked Chantal and Richard the same questions! 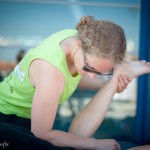 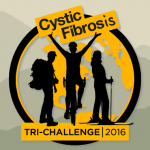