Hot off the press from Kona! 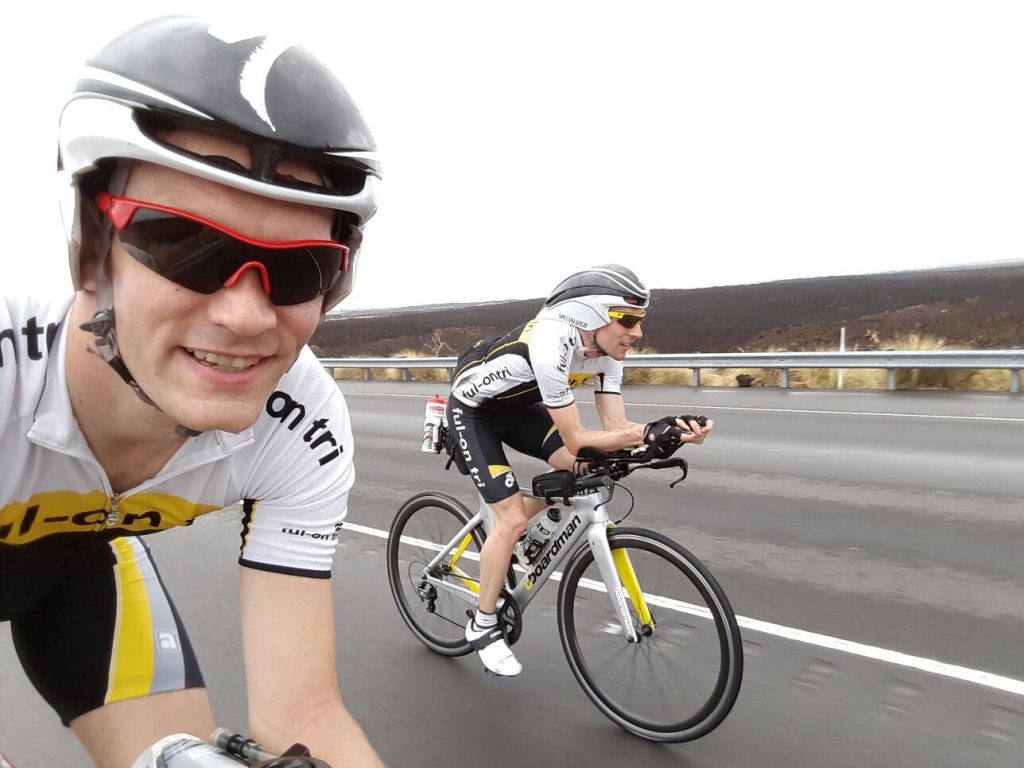 Kona 2016 done – absolutely incredible day, from the crowds, to seeing the leading Pros and some of the all time triathlon greats going the opposite way on the bike and run, to crossing that epic finish line!

In terms of the result, I got around in 9 hours 50 mins 48 seconds – 349th overall out of 2,315 athletes and 45th out of 108 in Age Group – far too many emotions to fit into a Facebook post but very very happy with both the time and position and definitely my best ever Ironman performance. I really thought sub-10 was well beyond me on this course, so I was very pleased to maintain my 100% sub-10 record and to finish in the top half of my Age Group. It was the first time in 3 attempts that I felt I executed the perfect Ironman race and it was a great feeling to completely nail it.

Swim – 01:00:00 – a nice round number – really happy considering it is non-wetsuit swim, I was expecting more like 01:05 or slower. It was my first mass start (about 1,500 Age Group men starting together) so I was worried it would be very violent, but I seemed to find some good open water and it was probably the most enjoyable part of the day.
Swimming in the Pacific Ocean is just incredible. Would’ve been comfortably sub-1 hour had I not had to queue to get out of the water at the end (I guess this is what mid-pack swimmers always face but still it was a bit annoying).

Bike – 05:24:23. Absolutely brutal. Really hot, windy and fairly hilly. Was really depressing in parts when I could only cycle at 20km/h downhill due to the headwinds. Although given there were a lot of cyclists of similar standard, there was a bit of unavoidable drafting in places which obviously helped. Struggled to keep the power up and averaged fewer Watts than at Copenhagen. Right leg started cramping up at about 110km which made me think I was headed towards a very tough day. But I increased my salt intake which seemed to work. Overall I was very happy to get off the bike!

Run – 03:15:24 – hands down my best run ever, given the tough bike and the heat/ hills it was far quicker than I was expecting. It was just one of those days when everything seemed to come together and I felt incredible throughout, could have kept running and running all day and my legs didn’t hurt anywhere near as much as they did at Copenhagen. I’ve become fairly used to mowing down most of the field on the run in triathlons, but didn’t think I could do it so dramatically against World Championship athletes (I gained 315 places on the run). It’s so hard to execute a good Ironman marathon, especially here with the heat and tough bike beforehand, so to put in a run like this at my first experience of Kona was awesome – for some context, I ran faster than 12 of the 43 Pro Men finishers, in a Pro field that contains only the top 50 professional long distance triathletes in the world. I wish my swimming and cycling were the same standard!

With 6km to go I caught up with my clubmate Haukur who had been 15 mins ahead of me off the bike, we ran the last 6km together, nobody overtook us and we crossed the finish line together in an identical time – it was an incredible moment and amazing finish line photo!

Finally I wanted to say thanks again to everyone who has helped me get here, in particular my coach Richard Laidlow, and for all the messages of support from everyone at home – means a lot.

Now looking forward to tonight’s Banquet of Champions/ after parties and then 1 more week in Hawaii where the real holiday can begin!!! 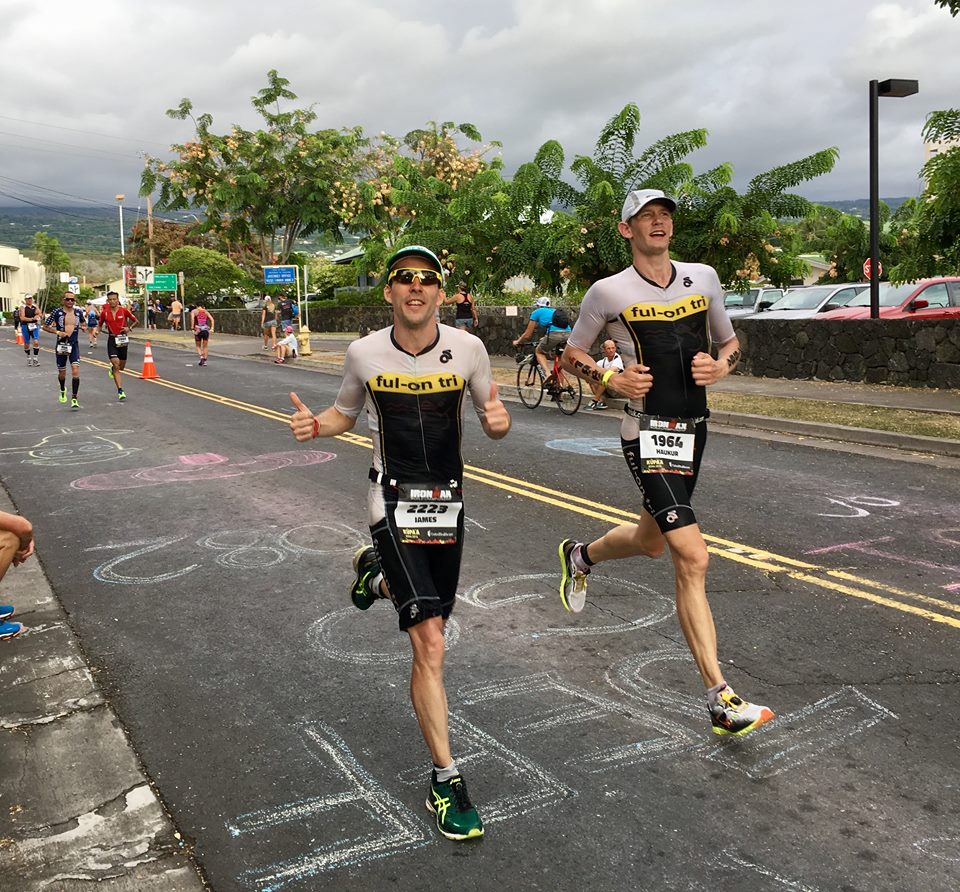 Here’s what happened in Kona yesterday. All things considered I am really happy with how it turned out.

I had the most comfortable start – don’t think I got a single punch – and settled quite quickly. It was a strange swim, I felt my concentration wandering often, and at the end I was lengthening my stroke out and cruising past many people. Exited in 54mins though, I will take that. 22nd in AG at this point, but not top 100. I believe they adjusted the course this year, it has been long in the past for historical reasons, so it is more comparable to a normal swim.

Out on the bike I just got overexcited, by the number of people on the road I reckon I had a better swim placing than previously. Anyway it was feeling quite easy and I felt was riding well. There were some big and deliberate groups and it was disappointing, but that is how it always is here. I didnt want to drop all those places and nor did i want to sot in with them, so i did have some surgy attacks to get in front when possible, completely disrespecting my plan. And through lack of self control i was riding too hard anyway – at about the 70km point I had averaged 30w higher than what I had planned; and given that I am about 60-70% of “qualifying fitness” in CTL terms, probably 40-50W higher than I should have done. This is massive by the way. It was quite instructive to see though, at one point I was up to 8th in category, can learn from this to see what is required to really do well here.

So I obviously blew up hard, and climbing hawi was pretty miserable, in age group terms I was losing about 20 places per hour for the rest of the race. I was recovering okay during this process. It wasn’t an optimal strategy but I ended up with a bike time not too dissimilar to previous years.

The only sensible part of my race plan was the run. Normally I would go out at about 4:40/km and build, but this time cognisant of my fitness I decided to start at about 4:45/km and have no expectations of going faster. The temperature did not feel so high this year, and I got a good rhythm at aid stations of ice in the front of my suit, behind, and in the cap. It was going okay, and it became clear that this plan was the right move.

I can only assume that my watch light got turned on during the swim crush, which is a big battery drain and invisible in the sunlight. My watch ran out around the halfway point. Immediately I decided that I was going to enjoy it. Two cheering stops for Lucy Goss in the other direction. Richard Melik told me the overall race time nearish the end of energy lab, and based on distance estimates I reckoned that a sub 10 was in reach but fairly hard.
At the 21 mile sign I saw someone’s legs just suddenly buckle under her and she fell right down in a faint, I was the first person to get to her. Absolutely no regrets about the time spent here, and several other runners also helped – in fact I don’t think a single person ran past.

After I got to the aid station to call the proper medics over I almost forgot to take water myself. Anyway this was now about the hardest bit of the course IMO, the last part of the QK on the run. I was thinking of everything that has happened and I was running and crying. It sounds bad for anyone who doesn’t know what I am talking about, but running and crying is amazing, emotions become so intense, it is about 30% pain, but the other 70% is happiness and love.

6km to go clubmate James Nellany appeared from behind me having gained about 4km since Ali’i turnaround. He was on fire and dragged me along with him, I told him that we would either finish together or that he should go on – the last thing I wanted was to sprint competitively. We stayed together, probably at the average of our natural speeds, and nobody overtook us from them on. I managed to pull out a 3:30 run, gaining over 100 places overall, but it is somehow not important. We crossed with the same exact time and I’m glad that James was officially ranked higher, I would consider it the biggest mistake of the day if it was the other way round.

In the finish area I broke down in happiness again, but also in humility because I was thinking about two people who I actually beat in the race. I’m not naming them because I’m not trying to brag here, but I have a lot of respect for these guys and it feels practically inappropriate to finish in front.
#1 was with me in my first real triathlon back in 2007 (I was 22), he was super strong even then. I’ve raced with him several times over the years and he has outswam me, outbiked me and outrun me every single time.
#2 is the guy who in 2011 told me I have potential to do more than just show up and finish these races, which is what I was doing at the time. And he kept telling me that until it happened. He has been saying that this is his last Kona, and although he has said those words before I think I believe it this time. It’s been a pleasure to share the road.

The last thing to note is the volume of messages I had to wade through afterwards, I reckon I have seen 90%+ of them now. And the surprising number of people who stayed up all night to watch it, you guys are the best 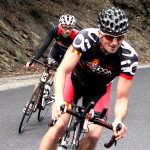 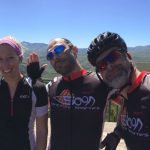 A “Typical” Triathlon Training Week with us here at Sancture Sportifs.